The scalability of ETS tables of type ordered_set with the write_concurrency option is substantially better in Erlang/OTP 22 than earlier releases. In some extreme cases, you can expect more than 100 times better throughput in Erlang/OTP 22 compared to Erlang/OTP 21. The cause of this improvement is a new data structure called the contention adapting search tree (CA tree for short). This blog post will give you insights into how the CA tree works and show you benchmark results comparing the performance of ETS ordered_set tables in OTP 21 and OTP 22.

This escript makes it convenient for you to try the new ordered_set implementation on your own machine with Erlang/OTP 22+ installed.

The escript measures the time it takes for P Erlang processes to insert N integers into an ordered_set ETS table, where P and N are parameters to the escript. The CA tree is only utilized when the ETS table options ordred_set and {write_concurrency, true} are active. One can, therefore, easily compare the new data structure’s performance with the old one (an AVL tree protected by a single readers-writer lock). The write_concurrency option had no effect on ordered_set tables before the release of Erlang/OTP 22.

The Contention Adapting Search Tree in a Nutshell

The structure of a CA tree is illustrated in the following picture: 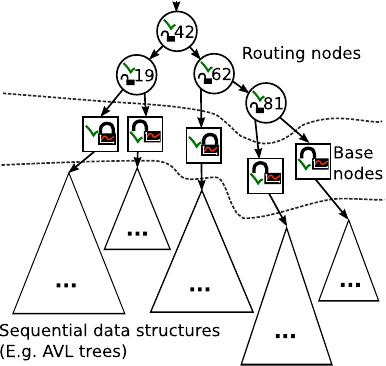 The actual items stored in the CA tree are located in sequential data structures in the bottom layer. These sequential data structures are protected by the locks in the base nodes in the middle layer. The base node locks have counters associated with them. The counter of a base node lock is increased when contention is detected in the base node lock and decreased when no such contention is detected. The value of this base node lock counter decides if a split or a join should happen after an operation has been performed in a base node. The routing nodes at the top of the picture above form a binary search tree that directs the search for a particular item. A routing node also contains a lock and a flag. These are used when joining base nodes. The details of how splitting and joining work will not be described in this article, but the interested reader can find a detailed description in this CA tree paper (preprint PDF). We will now illustrate how the CA tree changes its synchronization granularity by going through an example:

The performance of the new CA tree-based ETS ordered_set implementation has been evaluated in a benchmark that measures the throughput (operations per second) in many scenarios. The benchmark lets a configurable number of Erlang processes perform a configurable distribution of operations on a single ETS table. The curious reader can find the source code of the benchmark in the test suite for ETS.

The following figures show results from this benchmark on a machine with two Intel(R) Xeon(R) CPU E5-2673 v4 @ 2.30GHz (32 cores in total with hyper-threading). The average set size in all scenarios was about 500K. More details about the benchmark machine and configuration can be found on this page.

We see that the throughput of the CA tree-based ordered_set improves when we add cores all the way up to 64 cores, while the old implementation’s throughput often gets worse when more processes are added. The old implementation’s write operations are serialized as the data structure is protected by a single readers-writer lock. The slowdown of the old version when adding more cores is caused by increased communication overhead when more cores try to acquire the same lock and by the fact that the competing cores frequently invalidate each other’s cache lines.

The following paper describes the CA tree and some optimizations in much more detail than this blog post. The paper also includes an experimental comparison with related data structures.

There is also a lock-free variant of the CA tree that is described in the following paper. The lock-free CA tree uses immutable data structures in its base nodes to substantially reduce the amount of time range queries, and similar operations can conflict with other operations.

The following paper, which discusses and evaluates a prototypical CA tree implementation for ETS, was the first CA tree-related paper.

It might also be interesting to look at the author’s Ph.D. thesis if you want to get more links to related work or want to know more about the motivation for concurrent data structures that adapt to contention.

The Erlang/OTP 22 release introduced a new ETS ordered_set implementation that is active when the write_concurrency option is turned on. This data structure (a contention adapting search tree) has superior scalability to the old data structure in many different scenarios and a design that gives it excellent performance in a variety of scenarios that benefit from different synchronization granularities.